Today I have a special guest post for you about how to make your Kickstarter project more EU friendly–and if you’ve done that, how to communicate that on the project page so European backers can quickly and easily identify your project as something they can reasonably afford to back. You can see the financial value of European backers in the Euphoria stats–a full 27% of our backers were in the EU.

I “met” the author of this post (Euphoria backers will recognize him as andvaranaut) through the Euphoria campaign. Recently we were discussing EU shipping on Kickstarter, and he had so many invaluable things to say that I invited him to write a guest post about it. Andvaranaut lives in Spain, so this is the inside scoop on how to make an EU backer happy.

Also, andvaranaut happens to be a very talented graphic designer and developer, so I suggested that he create a few logos to be placed on EU-friendly projects. You can copy and paste them from this post or download them from my Kickstarter shipping folder. Enjoy!

I must confess that I am a sucker for board game Kickstarters. I’m always curious about all the new offerings. I love the idea of supporting small publishers and indie authors. And, for those cases in which I have ended up pledging, I have enjoyed myself immensely participating in the community that all energetic projects have around them. Most of the times, it’s a great ride which has a cool reward at the end – what’s not to like?

For a resident of the European Union, however, there is an important factor to consider – whether the rewards will be shipped from within the EU or not. While, thanks in no small part to the efforts of Stonemaier Games and other pioneers, more and more projects are shipping from within the EU, I still find that most projects either don’t offer that possibility or don’t make that information available or easy to find.

I won’t go into the logistic details – that’s not my area of expertise, and Jamey has already covered that base in depth in a great Kickstarter Lesson. Rather, I would like to explain, from the perspective of a potential EU backer, why exactly having an EU shipping system in place is a boon for us, and why it makes us much more likely to support your project.

It’s Not Just the Shipping

A distribution system such as the one Jamey recommends has the evident advantage of cutting on shipping costs. So, if shipping a game from your warehouse to Europe costs, say, $20 more than having it being delivered from within the EU, you are saving your backers $20, plus the time of an extra shipment step.

That alone is great. However, you might think that, if you find a way to keep the shipping costs down, or are willing to absorb some of these costs yourself, it should make no difference for an European backer whether you ship from within Europe or not. After all, it’s just a $20 value, right?

Turns out, it is not the case.

Let me give you an example. Let’s say I’m a backer in a $40 pledge level in Spain, my home country, which is representative of European Union laws. As you are a nice guy, you ask me for $10 extra for shipping and you subsidize the other $10, and send the package with a declared value of $50 (what I actually paid for it).

Then, this is what will happen when you ship my reward to me. First, the package will be stopped at customs, entailing a delay of a few days to a week. Second, two charges will then be levied – VAT (21%, or $10.5) and a fixed administrative charge (around $23 as of today). And third, when the mailman shows up at my door with the package (usually with no previous notice), I will be expected to pay both charges (around $34).

So the $40 reward level for which I already paid $50 back in the day ends up costing me about $84, and that’s with you taking a significant hit on your profits with the $10 discount. Conversely, had the package been shipped from within the EU, it would have already cleared customs and VAT at the port of entry, and I would not have had to pay anything other than the original pledge.

There are a few nuances to the process, as charges (and the administrative procedure) may vary depending on the country, but there’s a fairly uniform limit of 22 € (about $30) for all Euro-zone countries – any commercial shipment over that amount has to pay VAT and possibly a fee to clear customs. Because of this, some creators —in good faith— offer the possibility of marking the packages with the manufacture value.

However, this is not correct practice – the declared value of packages should always be the actual amount that was paid for them (and, in some cases, you even need to include shipping, insurance and other additional costs). While it might slip under the radar, if the package catches the eye of customs agents (and a huge package marked as $20 will probably do), the backer will be asked to provide a receipt stating what was actually paid for it – and pay VAT and other fees if over 22 €.

The bottom line is that having a somewhat expensive package shipped into the EU is a source of uncertainty, inconvenience and additional costs for your backers down the line. It does not help that the way customs work is somewhat confusing, and that the relevant information can be difficult to find. In most circumstances, it’s just not worth the risk.

The Value for Your Backers

As a potential backer, this is what I see when a project states that it will ship EU-bound rewards from within the EU:

By shipping from the EU, you are saving your backers a significant amount of hassle, in delays and cost. You are also saving yourself from frustrated backers (“I already paid for shipping – what do you mean I have to pay $30 extra?!”), which can be damaging to your reputation through no fault of your own. And it’s faster and safer – you can use local shipping companies instead of the regular mail, which means tracking numbers and speedy delivery.

As things stand today, it’s also a great way to differentiate. Every backer is a world, but I’ll tell you this: I’m very unlikely to back any project which does not ship from the EU, specially if I have several other great projects to choose from which do. 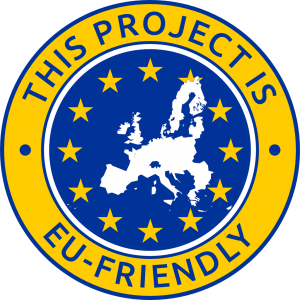 Let the World (or the EU) Know

Let’s say you have a system for EU shipping in place, either by following Jamey’s suggestions or by any other means (such as somebody acting as a mail forwarder, or just shipping everything from the EU). That’s great – but if you don’t make an asset out of it, you’ll be missing on a lot of its potential value.

So tell the world! Be sure that potential EU backers will know from a cursory glance at your project that you will ship from within the EU. There are three places in which you should consider mentioning this:

I am in the habit of asking, and I’m continually surprised by how many creators are shipping from within the EU but don’t mention it in any easily reachable place of the project page. I wonder how many EU backers these projects could have gained by making that information more readily available. While it’s great to give the information on comments, updates or replying to interested persons directly, the truth is that neither of these avenues will help you capture new backers, save for very dedicated ones – so be sure that your main page gets the point across effectively.

In all honesty, the best model I have come across is Euphoria – there’s a “Free shipping” call in the video, “customs included” in the pledge levels and a clearly written Shipping section in which the whole EU shipping model is outlined. Most well-meaning projects mention “free shipping” or “shipping included”, which, while hinting in that direction, is not the same as “ships within the EU”.

Byzantio and Canterbury are other examples. They both mention in the project page that the games will be shipped from Europe, and, while not explicitly stated in the pledge levels, they make clear that the EU is a special case. However, in both cases, the information is in the “Risks and Challenges” section – it would probably have been a good idea to also state it in the “Shipping” section to make it more easily discoverable.

Once you do the math, you may find that you still have to ask your EU backers for some extra charge. Perhaps shipping to their particular country is expensive, or you need to add VAT (around 20%) to the pledged amount.

As long as the involved amounts are not outrageous, I would not sweat it. Of course, it’s nicer if you can offer completely free shipping, but remember that you are already saving your backers a significant hidden cost by shipping from within the EU.

If the amount is significant (perhaps over $10), a clarification in the Shipping section of your homepage (or a linked update) explaining it could be a good idea. You may take the chance to stress that the amount charged is final, so that extra charge is actually much cheaper than having the package stopped at customs.

Offering a more advantageous package can also be worth considering. For example, Templar – The Secret Treasures, which will ship from Germany, charges $15 for shipping to most of the EU, but offers free shipping for pledges over $80, and a number of attractive bundles at that price point or above. As the base game cost is $50, I would expect most affected people to have gone with one of the bundles – $65 for a game is hefty, but two games at $40 each is a very competitive price.

Why Is the EU Special?

While I’m no expert, I’m sure that most of what I have written above can be applied to countries or territories other than the EU. Here are some reasons which make the EU a good target for your efforts:

While talking to Jamey about the possibility of tackling this subject, he had a great proposal – namely, creating some kind of banner to easily identify projects which will ship their EU-bound rewards from within the EU, as a way to state “This project is EU-friendly”. Here’s a logo which you are welcome to use in your projects as a way to catch the eye of potential EU backers, simple and unique enough to be recognizable and readable at small sizes, both in “stamp” form (SVG, PNG) and in banner form (SVG, PNG).

You may also have your art director create a personalized image or banner which conveys the same message. Either way, if creators make a habit of clearly showing EU shipping in their project pages, it will not only convince potentially interested backers to pledge with confidence – it will help bring more creators on board.

Until EU shipping becomes the norm instead of the exception, it would also be great to have some kind of central index of projects with intra-EU shipping. I have created a GeekList to that effect; contributions are certainly welcome.

80 Comments on “Kickstarter Lesson #47: This Project Is EU Friendly”