Legends, Lore, and Insights About Creating Pre-Painted Miniatures for a Crowdfunded Game

As you can probably tell by yesterday’s post about our 3 new treasure chests and our recent announcements about Scythe, exploring the world of miniatures is on my mind. Many of the most successful Kickstarter projects ever have had a strong focus on miniatures, as they’re seen as premium items that allow gamers to both visualize and touch the worlds they’re interacting with.

I asked Cody Miller, creator of the huge Kickstarter hit Xia: Legends of a Drift System, to write a guest post on the blog to share his insights about the process of creating miniatures, especially in relation to crowdfunding. Thanks for taking the time to write this, Cody!

First – I’ve personally found this blog extremely helpful – and I’m glad to be able to finally give back a little! Thanks for the opportunity to share what I’ve learned!

I actually created painted miniatures for my first prototype of Xia.

I used FIMO clay – and plastic bits to make the original prototypes. I made these miniatures more for my own enjoyment than any

thing – I didn’t start out trying to make a comercial product, just a fun game for me and my friends. I used these clay ones with the prototype versions of Xia for years.

I then moved on to making another set of miniatures out of bass wood and plastic bits. Again – these were just for my own enjoyment – I don’t think it’s anywhere near a necessary step – however it did help me in the final versions, as I had a very good idea of the scale and color-schemes I’d later use.

When I finally decided I’d try to make Xia a commercial product, I started by trying to figure out how to get miniatures made for a small print run (my goal was 1000 copies).

I discovered there are a multitude of ways to get miniatures made! I narrowed it down to 3 that I was considering:

Pewter: Pewter miniatures are probably the cheapest for high quality – short runs (less than 500 copies). The molds are cheap ($50) and it’s easy enough to find someone to cast them for you at a fairly cheap price (about $0.25 per miniature I think). The downside is that they are very heavy, and if your miniatures have thin parts, they can break fairly easily. Also – I didn’t find the pricing to reduce if you order a larger quantity – so you can’t get much of a break.

Resin: Resin miniatures I considered briefly – you can get very nice quality, for a fairly cheap price. But the models are more brittle than injected plastic.

Injected Plastic: I ended up going with Injected Plastic miniatures. These have a very high up-front cost in the molds, but once the molds are made the miniatures themselves are only cents to produce (unpainted that is). If you end up going over 1000 copies, this is the most economical.

Though there are several ways you can make a miniature, they all involve having a master model from which to work from. Getting that master model is they key. I decided to get my master models by using 3D printing. I didn’t do this because it provided any benefit I was aware of, I simply couldn’t figure out any other way (at the time). I’ve since learned that often times manufacturers have artists on call that they can contact and have them create models for you. So you can keep that in mind for your own projects.

I looked online and hired a freelance 3D modeler to help me make my master models. I actually had a great stroke of luck because the 3D modeler I hired had experience with miniatures and the miniature manufacturing process. It’s important to note that because models have to be created in a mold – there are certain things you cannot do, or are difficult to do without splitting a model into separate pieces, then having them assembled during production. This can add extra costs in assembly – so it’s a good idea to check with your manufacturer about what their limitations are – and if they’ll have any trouble with your models.

A great resource for me in this creation process was Shapeways. They are a company that provides high quality miniature 3D printing for very cheap. I was able to print out and test each miniature for very cheap (about $3-$12 depending on the size). These are decent quality for testing, but at the time, Shapeways didn’t provide high enough resolution for master models.

I had Moddler.com create the master resin copies of each miniature, printed in unltra-high resolution. These came out extremely beautiful, with a couple exceptions – some suffered a little chipping on the underside which I fixed using car bondo – while one was so bad they re-printed it and shipped it to me. These were pretty expensive to have created, I think about $80 per miniature.

I sent these master-models to my manufacturer, PandaGM, who used them to create the metal molds for the injected plastic final versions of the miniatures.

I used the 3D printed miniatures from Shapeways to test out my paint schemes. When getting pre-painted miniatures I was charged by the number of colors per ship, as well as the difficulty of the details included. So I tried to get the most out of each paint color, while making them easy to replicate for manufacturing.

Once I had the color schemes I painted a set of “paint masters” – so the exact paint jobs that I wanted for the final ships – and I sent them down to my manufacturer so they could replicate them.

After a few months – my manufacturer sent proof versions of the final ships. The ships looked great for the most part!

There were lots of errors – paint on the wrong places, dark colors, some melted-looking miniatures. So I asked for a revision. It took the manufacturer about 2 months to send me a revised set.

There were still issues – some errors in paint, and plastics were fixed, while others persisted. 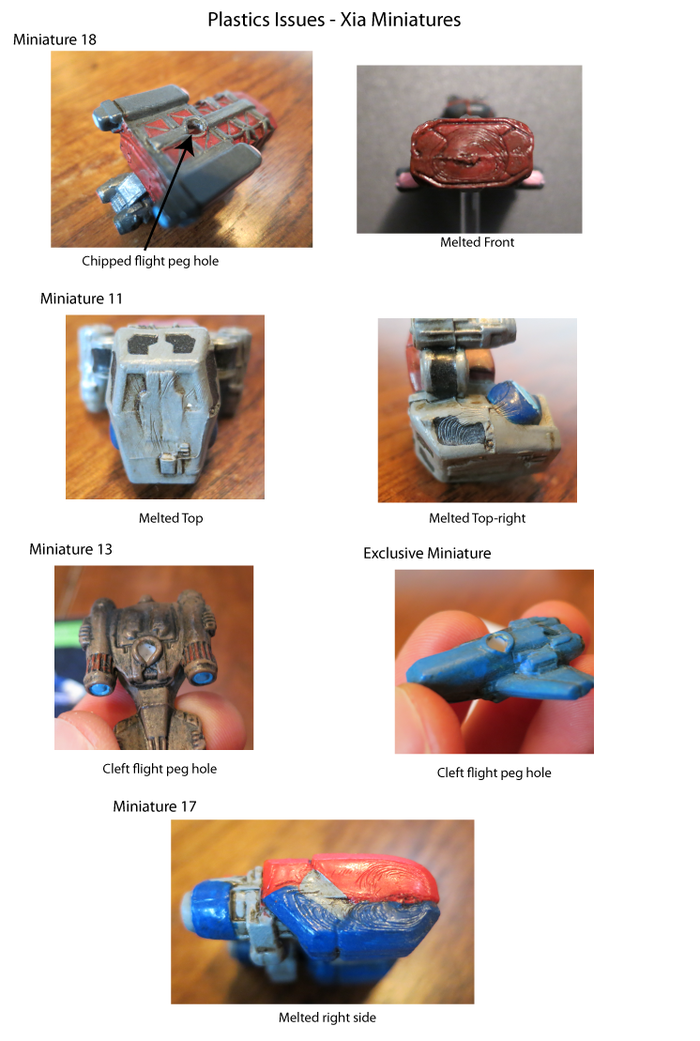 After two more rounds (over 3 more months) we fixed all of the painting issues. Some of the plastics issues were apparently insurmountable – and they persisted on through to the final product.

One perplexing thing to me was – the plastics issues didn’t seem to have much rhyme or reason as to what worked, and what didn’t. However – I did learn the thicker the miniature, the more likely it is to have a “melted” look on one side, as the hot plastic being injected can slightly cool before entirely filling the mold – causing some of the melting issues seen above.

The production miniatures came out very nice at a glance – they are definitely a show piece, and I’m very glad that we put all the work into them that we did!

However – the final paint jobs and miniature quality has a large variance – most are pleasing, but many things we worked so hard to fix in the revisions have re-surfaced in the final product. I’ve received complaints of very dark miniatures, or misshapen miniatures, missing paint, or globs of paint in the wrong place, dirty and “gunky” miniatures. These are not fun emails to receive.

Another perplexing thing happened as well – the miniatures in the proofs were a hard plastic – while the final production miniatures were a much softer plastic. Speaking with my manufacturer they didn’t have any answer as to why this was – or what happened. But the final versions are much more bendy than the proofs I was given. Take away point: Talk it over with your manufacturer before production!

I know this might be a bit overwhelming – so here are some simple points that I’d consider my top 4 things to think about when considering miniatures in a project:

Miniatures are expensive to produce, and (at least for me) have a fairly high defect rate compared to other components – which means you’ll have to ship out replacements (or give refunds) so you’ll want to ensure you budget extra for the postage.

Some frustrating issues occurred simply because I didn’t ask my manufacturer specific questions – and simply assumed the proof miniatures would be exactly like the production miniatures. Many issues came about simply because we didn’t talk about them. Be aware of the specifics, talk with your manufacturer and nail down the details before you hit production.

In my experience – Miniatures added about 6 months to my project. This was for 22 unique molds with 22 unique paint jobs – so keep that in mind. Depending on the number of unique molds, and if whether you’re painted or unpainted – that time could shrink drastically – however, especially given Kickstarter’s new policies, I’d say give yourself some extra time to get those mini’s exactly how you want them.

If you’re running a Kickstarter campaign, and including miniatures – backers love to hear the details! Keep them informed why things aren’t going how you planned, or exactly what the issues are with the plastics. I was surprised how forgiving of the delays my backers were, simply by sharing those details. No one wants a poorly produced product, and the waiting is much easier if you know why you’re waiting!

Despite all of the difficulties, the expense, and some of the final miniatures being sub-par, I’m happy to have them in Xia. I think they add life and vibrancy to the game (I’m a very visual person) that I find very appealing. When I see pictures of people playing Xia – the miniatures stand out – and I’ve received many emails of praise for them.

I’d be interested to see how things would go with another project with my manufacturer (PandaGM), as this was the first time they’d done pre-painted miniatures, whether they have streamlined the process, or if it would be a similar uphill challenge.

It’s difficult to try and distill two years worth of experience into a single blog-post, so I apologize if anything is unclear! Please let me know if you have any questions, and I’ll try to answer them in the comments below!

See also: This great article about miniatures from Massive Awesome.

65 Comments on “Legends, Lore, and Insights About Creating Pre-Painted Miniatures for a Crowdfunded Game”