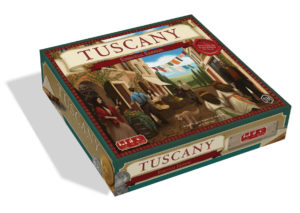 From July 13-19, I ran a pre-order campaign for Tuscany Essential Edition, as slimmed-down version of the Tuscany expansion pack to Viticulture. I ran the campaign through retailers–that is, 84 different retailers handled the transactions–and we sold 3064 copies of the expansion to those retailers last week.

I previously ran a similar campaign for Moor Visitors, and I detailed the reasons for running this type of campaign here. Below are the primary benefits for each of the parties involved:

Note that this method is specifically used for a product that (a) has no stretch goals, (b) is an expansion to an existing product that retailers want to continue to sell, and (c) is inexpensive enough that we can afford to make it without raising funds in advance.

I learned a few things while running the Moor Visitors campaign that I applied to the Tuscany Essential campaign. Here are the new elements:

Also, one of the nice things about this pre-order system is that many of the participating retailers bought enough copies of Tuscany EE to account for additional customers who discover the product after the campaign, and I continue to feature those retailers on our website.

I’m realizing now that this post is more about what I did than what I learned, though I think that’s because I didn’t really learn anything new as compared to the Moor Visitors campaign (other than the fact that all of the revised methods above seemed to work really well). This type of campaign seems to run really smoothly as compared to the tumultuous (though admittedly more exciting) ride of a Kickstarter campaign.

What are your thoughts about these methods and this type of campaign? Back when I ran the Moor Visitors campaign, I hoped I might see another company try something similar so I could learn from their methods. But I don’t think I’ve seen that, so perhaps I’m overestimating the appeal.