My Struggle with Premium Pricing

I’m referring to products that necessitate high prices because of how much they cost to make. Specifically, the product I’m struggling with are the metal mechs for Scythe. I have the samples, and they look, feel, and sound fantastic: 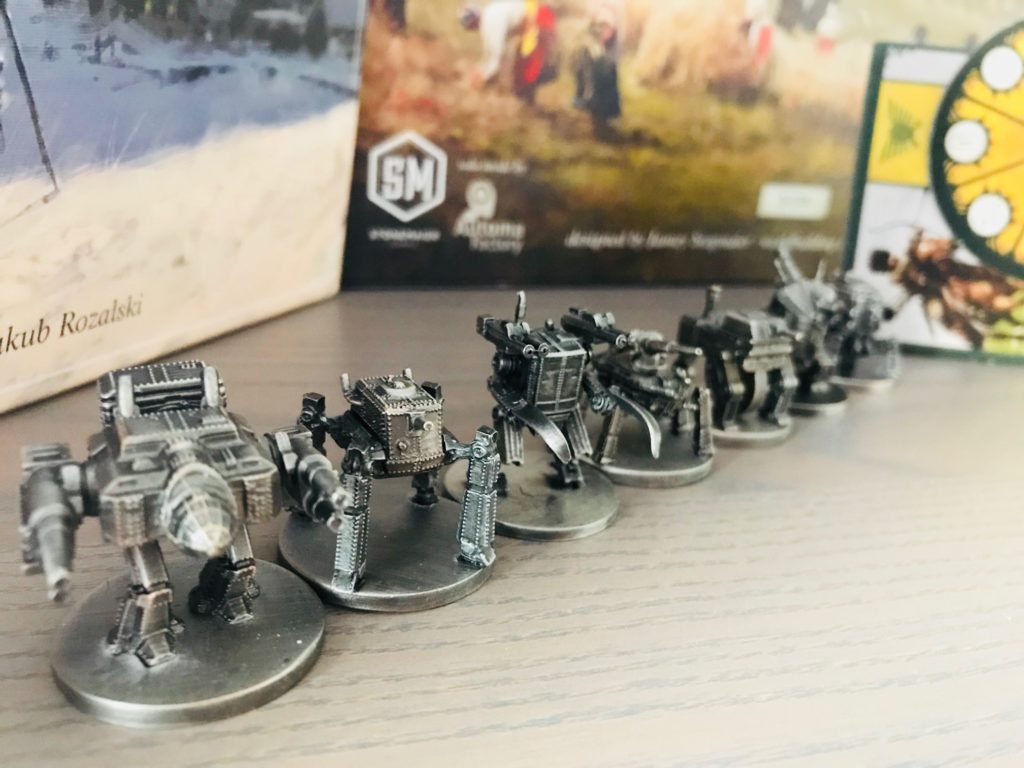 There are 7+ factions in Scythe (the + refers to the spoiler aspects of The Rise of Fenris), so each set of metal mechs has 7+ units in it (1 mech per faction). I ran a preliminary poll on Facebook to gauge interest in the mechs (including the estimated price, which I’ll get to in a second), and over 1,000 people indicated they want them. That’s enough for a small print run.

My manufacturer has spent almost a year working on these mechs. They created new moulds, tested various types of inking, experimented with glue and assembly, and evaluated various inserts. Jakub has illustrated the box. We’re now very, very close to entering production.

7+ metal mechs–that is, 7+ total miniatures, not 4 miniatures each for 7+ factions–cost $26 to manufacture. That doesn’t even include the insert, box, colored rubber bases, or freight shipping, all of which bring the total closer to $30.

We typically use a 5x multiplier for items we sell through distribution, so that means if we wanted to sell a set of metal mechs to game stores, the MSRP would need to be $150. Essentially what you see in that photo above would be $150. (The reason for the 5x multiplier is that distributors get a 60% discount off MSRP, so if something has a $150 MSRP, we receive $60 from the distributor.)

The alternative is to sell them directly at a more reasonable price–say, $60 per set. That still means if a Scythe fan wants enough mechs to replace all of their plastic miniatures, they would need to spend $240 + shipping.

So despite customers telling me they want this product and they’re fine with the price, I’m struggling to proceed with it.

However, I learned something this weekend that helped. It didn’t solve my struggle, but it’s a decent step forward.

I was listening to a Seth Godin interview on the Don’t Keep Your Day Job podcast. Around the 31:00 mark, Seth talks about pricing. He uses the example of an exercise he uses with entrepreneurs and creators in which he asks them what they would do differently if they had to charge 10x more than what they currently charge.

Think about that for a second as it applies to a product you make or a service you provide. If you were required to charge $500 for it instead of $50, what would you do differently?

In Seth’s exercise, he says that nearly every person says, “”I would make it better.” But Seth asserts that’s not the right answer. Rather, in his opinion, the right answer is, “I would help my customers feel better about their choice,” emphasizing to the creator that, “It’s not for you. You’re the person who made it, but you’re not the person who’s going to buy it.”

This message really struck a chord with my premium pricing struggle. Even though it’s meant as a hypothetical, the 10x example almost literally applies to my metal mech situation.

So part of it is me coming to terms with the fact that the price seems high to me because the metal mechs aren’t something I would buy. That’s just my personal behavior as a consumer. I’m sure there are ways I could enhance some of my favorite games, but other than buying expansions, I rarely do. But that’s okay–I need to remember that other people have different desires than I do.

The other part is the idea of helping my customers feel good about their choice. This can include shipping before retailers get the product and offering good customer service, though those are standard things we do for pre-orders. So I’m thinking I’ll put foil and individual numbering on each box of metal mechs to emphasize how special they are, and perhaps offer a discount for customers who buy 4 sets. [Update: Dusty C. bought up the idea of maybe including a signed thank-you note in each direct order.]

That’s a step in the right direction, at least.

What do you think about this topic? Have you ever struggled with a premium price? Did you implement Seth Godin’s method?

55 Comments on “My Struggle with Premium Pricing”