Statistics from the Tuscany Kickstarter Project

Just like I did for Euphoria last July, I’m here with full statistics from the Tuscany Kickstarter campaign. My hope is that you will find these statistics useful when planning your Kickstarter project. Please keep in mind that these totals are probably going to be very different from a first-time campaign, but the percentages might still apply. Also, I’ll dig deeper into the numbers in the commentary after each graphic–while hard data is helpful, it can also be misleading.

Let’s start off with a quick overview of the final numbers from Tuscany, according to Kickstarter:

In comparison, Euphoria raised $309,495 (2,063% of the goal) from 4,765 backers in the same amount of time. So the total funding went up, largely because the key entry point for Tuscany was $79 or $99 (both of which gave backers Viticulture and Tuscany since Viticulture is needed to play the Tuscany expansion pack), whereas the price points for Euphoria were $49 and $59. The average pledge amount for Tuscany was $103, while the average for Euphoria was $65.

Next I’d like to share some overall backer data by location. I’m able to offer this for the majority of backers because I sent out the backer survey on the same night that the Tuscany campaign ended. Generally I would discourage doing that, but I like to start working with that data right away. It’s been 3 weeks since the campaign ended, and out of 4,333 backers, only 38 remain who haven’t filled out the survey.

Also, I let backers continue to add onto their pledge at Kickstarter prices through the end of April (yesterday), and I also let non-backers pre-order the limited editions of the games at higher prices through that date. All of that data is included in the chart below.

I compiled this a little differently than Euphoria because there were a lot more options on Tuscany–it’s simpler to calculate the total pledge amount.

If you compare these to the Euphoria stats, you can see some key differences. The first is the number of backers in Asia. For Euphoria, the total percentage of backers in Asia was 1%. It’s up to 4.5% for Tuscany, which I correlate to the decrease in cost for shipping to Asia thanks to 4px (see this post about shipping).

I also have a new arrangement with a fulfillment company in Australia that helped me dropped the shipping price there, increasing the percentage of backers in Australia/New Zealand from 1.15% to 3.39%. I’ll write more about that after I can truly vouch for it, but I’m confident it will work smoothly.

The percentage of backers in Western EU went down from 12.59% to 8.9%. Again, I attribute to shipping costs. Shipping to the EU for Euphoria was “free,” but in reality, I should have charged a little bit for backers not in Great Britain and Germany. I did that for Tuscany, and the numbers went down. That’s a bit of a dramatic drop for $9 in shipping and no customs costs–perhaps I spoiled those backers the first time around. :)

At the bottom of the chart you can see a comparison in number of backers in the US, Canada, and other international locations between Viticulture, Euphoria, and Tuscany. I’m glad to see that we continue to trend towards a 50/50 split between the US and the rest of the world–shipping makes a big difference. Perhaps if our games were more language-independent, we might attract even more international backers.

Thanks to Kicktraq, we have some great daily data to share: 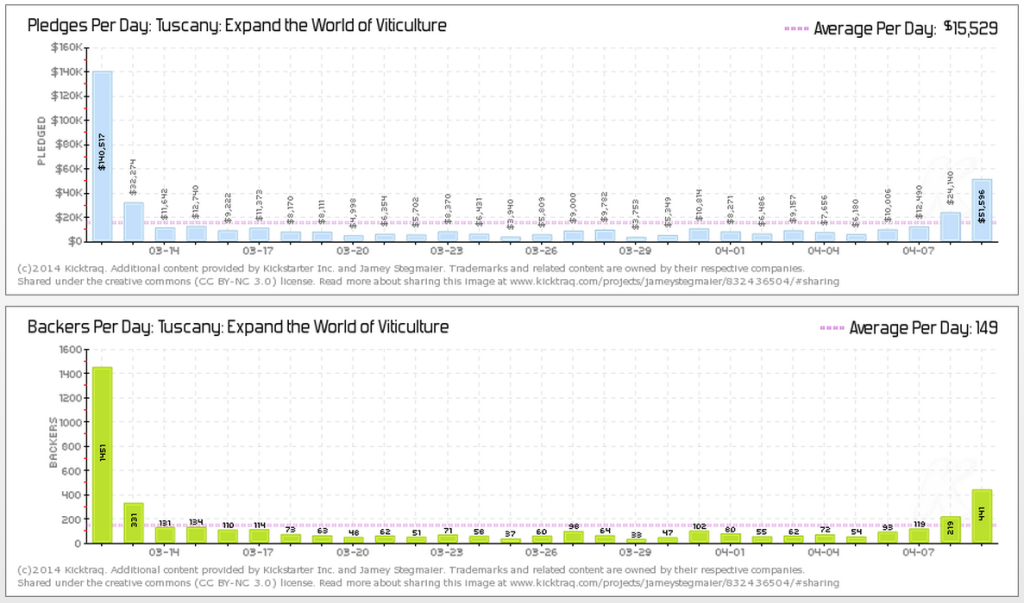 This data is really interesting to me because it shows a new type of bell curve: It’s heavily weighted towards the front of the project because we had such a huge outpouring of support on Day 1. I’d much rather have backers support the project from Day 1 instead of waiting for the reminder e-mail at the tail end of the project, but it’s good to know that we should expect lower numbers of backers in the final 48 hours.

I think this data also shows that we probably could have run a shorter campaign. Based on the flow of the project (surveys, updates, etc), I think it could have been a 3-week campaign instead of a 4-week process. We might explore that in the future. I would continue to recommend 30-40 day campaigns for first-time creators, because it’s going to be quite a learning process. 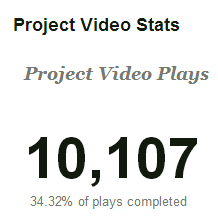 So what’s going on here? I think part of it is that Euphoria tells a story, and it was a brand-new commodity. A lot of people know what Viticulture is and they know who we are, so they didn’t need to watch a video to back the project.

But I do wonder if there’s something else in play here. The video was short–just over 2 minutes–which I think is the right length. Any ideas on why the video stats were down?

I didn’t do this for Euphoria, but I asked Tuscany backers to share with me their connection to Stonemaier Games. The results are really interesting to me, and I appreciate that so many backers took the time to answer this question.

Notable is that there are a large number of return backers. This is a good thing–it tells me that our backers/customers are happy with their Stonemaier Games experience, and they’re returning for more.

It’s also great to see that there are quite a few backers who backer the project partially based on reputation even though they haven’t backed our projects in the past. And it’s equally good to see that we’re still attracting new backers who had never heard of us before.

Last, it means a lot to me personally that people who have found value in my Kickstarter Lessons blog or my consultation decided to support the project in some way. As you know, this is all free content, but it takes a lot of time to write three entries a week, so seeing some level of reciprocation was nice to see.

Last we have Kickstarter’s breakdown of where backers came from. I’ll highlight some key points/contrasts here, and you can see the full chart below that. Note that all rows highlighted in green cite Kickstarter as the primary referrer: 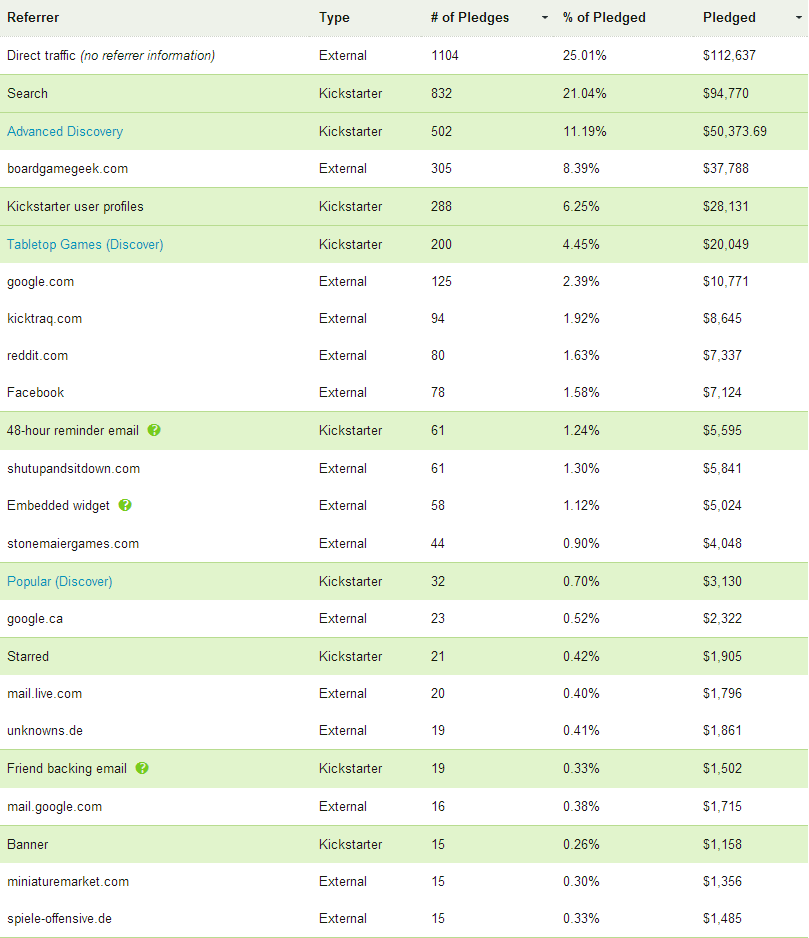 44 Comments on “Statistics from the Tuscany Kickstarter Project”