The Surprise Business Lesson I Learned from Top Chef

I’ve watched about 10 seasons of the competitive cooking show, Top Chef, but it wasn’t until the recent finale that I learned the true secret to success on the show.

The finale branched over two episodes. In part 1, the contestants were required to cook over an open flame. Worried that her fish would stick to the grill, Brooke put a few pieces on the grill early on as a test. When her concerns were validated, she wrapped her fish in leaves and cooked it that way instead. The judges proclaimed that her fish was perfectly cooked, and they scolded another contestant for not testing the flame.

In part 2, much ado was made about the shopping choices made by both contestants. Brooke forgot to order the pork belly she wanted, but she had also ordered prime rib just in case. Shirley ordered suckling pigs, and she had pork belly as a backup.

Being a great cook is important, but like anyone else, you’re going to have good days and bad days. Sometimes the grill is going to be too hot. Sometimes the ingredients aren’t going to be as tasty as they looked in the store. To rise to the top, the best chefs have backup plans.

I think this lesson applies beyond Top Chef to entrepreneurs, crowdfunders, and others. It’s been on my mind a lot since I watched the finale. How have backup plans benefited Stonemaier Games? In what areas do I not have backup plans?

Here are a few examples of backup plans I’ve had in place:

One of the ways I struggle with backup plans is when I assume something to be true (and thus I don’t even think to create a backup plan for it). For example, for a long time I assumed that distributors would always pay me after they had received their games (not always true) and that fulfillment centers would eventually ship our Kickstarter rewards (this has been true for us, but there are some creators who have struggled with this).

Here are some things I’ve assumed to be true for quite a while, and I don’t have a solid backup plan in place for them: 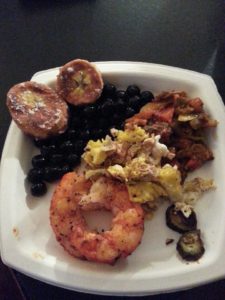 On Saturday, I hosted a Top Chef-inspired cookoff and game day. We played some games, then a friend and I faced off with a bevy of surprise secrete ingredients provided by friends to try to cook the best meal. Have you tried cooking with boba, capers, chives, bitter melon, plantains, and makok all at once? I have!

Part of my meal involved fried plantains. I thought about throwing them all in the frying pan, but I was worried that they wouldn’t fry well without any breading. I did what Brooke would do–I fried half of them first to see how they turned out.

My suspicious were confirmed. So I very lightly breaded the remaining plantains with flour and spices, and they were a nice crunchy complement to my Cuban/Cajun-inspired dish. Backup plan for the win! (Note: I lost the competition.)

What types of backup plans do you have in place for your crowdfunding campaign or your business?