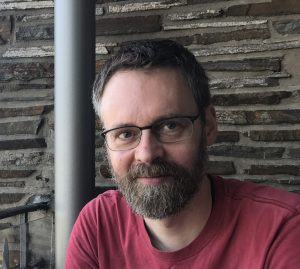 Morten was brought on board as a part-time developer in 2015 after having made solitaire modes for Viticulture and Between Two Cities.

After almost three decades of playing multiplayer games the interest in solitaire gaming came when everybody in Morten’s gaming gang started getting children, which made game nights hard to organize. In desperation, Morten turned to solo gaming and to his astonishment found it highly enjoyable.

Shortly thereafter, a happy coincidence led Morten to contact Jamey Stegmaier, which resulted in a flurry of emails about games and general geekiness.

Reinvigorated by solo games and inspired by Jamey, Morten got serious about board gaming. He became increasingly involved in Stonemaier Games, started a blog, and entered the PnP game Endless Nightmare into a design contest.

Morten sporadically chronicles his work on his second blog, “Dear Jamey” in an effort to give the community a peek inside Stonemaier.

In his lair house in Ballerup, Denmark, Morten plots his bid for world domination lives with his wife and son, and spends way too much time writing and playing board games.

For a long time Morten was the only catless person in Stonemaier Games and thus the company’s black sheep. He strove to make up for it by loudly pointing out that Jamey is even more deviant, since he doesn’t drink coffee. After many years Morten’s family teamed up with Jamey and he’s now owned by a cat.