This is a compilation of the designer diary entries posted in the Between Two Castles of Mad King Ludwig Facebook group. They are listed here in chronological order, with the most recent entry at the top. 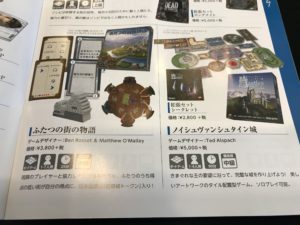 How exactly does the mashup of Between Two Cities and Castles of Mad King Ludwig work?

I think the key to a good mashup in any genre is that you pick the elements that work together and remove the elements that don’t. This was a long process for Ben and Matthew to figure out, so I’m just going to focus on the final results.

What we kept: We kept the core partnership mechanism from Between Two Cities, as well as the square tile shape and scoring only at the end of the game. From Ludwig we kept several of the tile scoring mechanisms and bonuses, as well as the spirit of the idea of creating a zany, misshapen castle.

There’s a lot more that we cut: The middle round of Cities when you place duplex tiles (which is one of my favorite parts, and one that Ted at Bezier asked us to look into, but we couldn’t get it to work), the grid restriction in Cities, the scoreboard in Cities, the activity rooms in Ludwig, the room completion bonus in Ludwig (that was a big cut–it just didn’t work as well when you’re building a front-view castle instead of top-down), and the global goals in Ludwig (Ben and Matthew experimented with them, but as I recall, they weren’t as interesting as they are in Ludwig).

What are some of your favorite mashups in any genre (games, books, movies, music, etc)? What makes them work for you?

Why are there peacocks in some of the rooms in Between Two Castles of Mad King Ludwig?

The answer is a bit embarrassing for me to admit.

The real King Ludwig was a bit obsessed with swans, so in the Castles of Mad King Ludwig expansion, Bezier has a swan mechanism. While designing Between Two Castles, Ben and Matthew thought we might incorporate some swans into the art, potentially referencing them in a future expansion.

I primarily worked with two artists for this game, Anez and Laura. Knowing that we wanted swans in some of the art, one of the first illustrations Anez sent me was of the tapestry room: 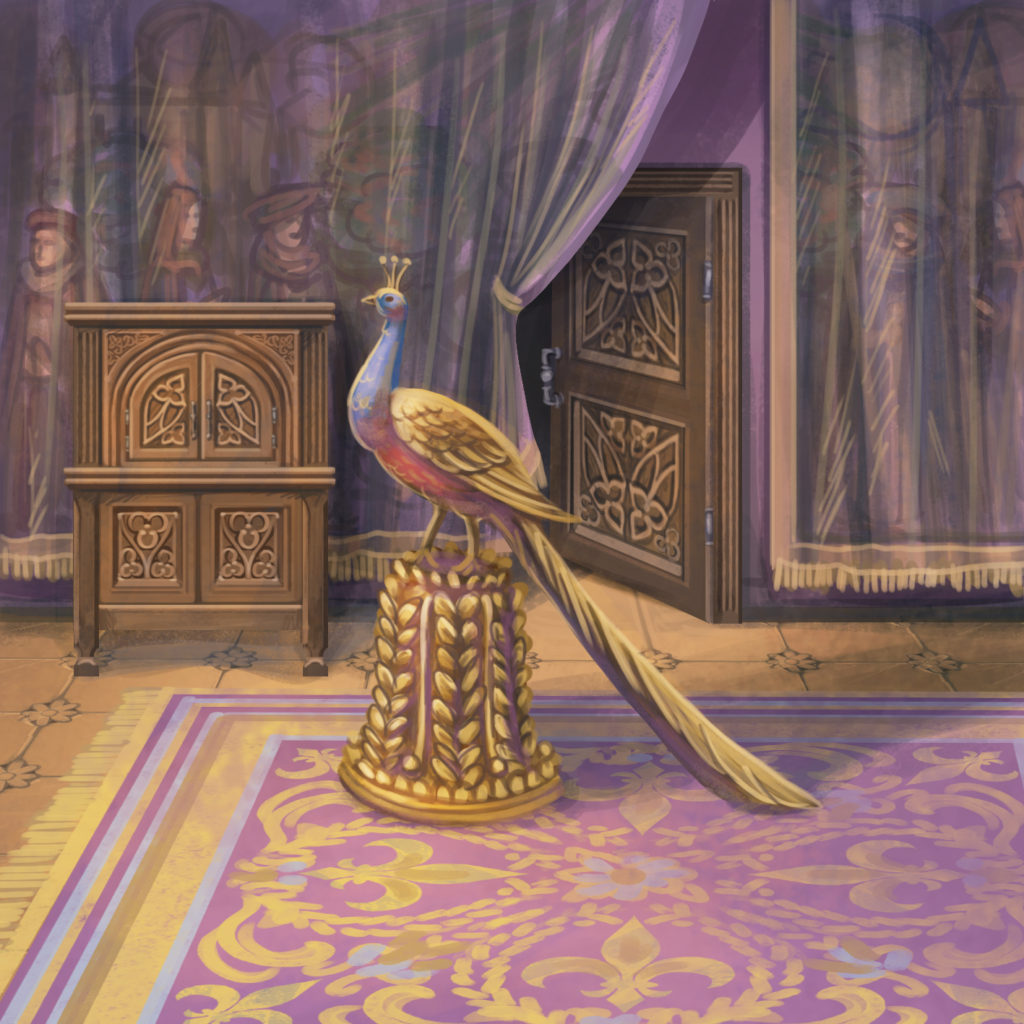 I complimented her work, and we proceeded as planned.

The problem is, as you can probably tell, the bird in that illustration is not, in fact, a swan. This may have remained an isolated mistake, but a few days later, Laura asked me how we wanted the swans integrated into the art. I was happy to share with her the recently completed tapestry room as a reference.

After a while, Ben and Matthew decided that it would be better to stop putting swans in the art (they hadn’t seen these illustrations–it was a design decision). So I went to inform Laura and Anez of this news, at which point we all realized that I had been asking the artists to create peacocks, not swans.

So despite the embarrassing revelation that I don’t know the difference between swans and peacocks (I mean, I really DO know the difference, but apparently not when it matters), I decided to keep the peacocks in the illustrations where they were already hanging out. They seem to be having a good time.

The next time you play Between Two Castles, look out for those peacocks. It’s totally fair for you to tell your friends that Jamey Stegmaier doesn’t know the difference between swans and peacocks.

In this week’s design diary, I thought I’d talk about an important feature of Between Two Castles of Mad King Ludwig: the scorepad.

This is the first scorepad Stonemaier Games has printed. It’s not that we have anything against them; rather, it’s just that all of our other games involve ways for players to score points during the game, necessitating score tracks and tokens (the coins in Scythe).

But wait, you say–what about Between Two Cities? There’s no in-game scoring in that game. Why not include a scorepad?

We certainly debated it. But we found that it created a more dramatic experience to have the “race” up the scoreboard at the end of the game. It made scoring a more collective experience. 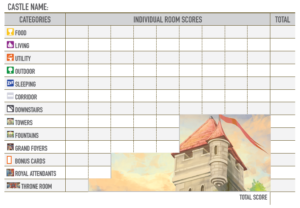 So that brings us to Between Two Castles. At the end of the game, you pass out a score sheet to each player, and they use it to calculate the score for one of their castles. This process happens simultaneously, and then you reveal them with as much flair as possible.

This wasn’t our first solution. Ben and Matthew tested several others, but for various reasons, they became less viable over time.

For example, at one point there was a shared scorepad, like in Agricola or 7 Wonders, with a leader asking each player category by category what their score was. But this took a LONG time and resulted in errors, as players have tiles of the same type spread throughout their castles.

Another example that was used for a while in playtesting were coins. This stemmed from a version of the game where players scored midway through the game and at the end of the game. Whenever you scored a room, you placed some coins on it. While the visual was nice–it was very clear which rooms you had scored or not–it became a lot more fiddly to clean up.

Even as we gravitated closer and closer to a scorepad, we still considered other ideas, like dry erase boards or a scoring app. There’s nothing wrong with either of them, but I prefer the artifact of score sheets you can look back at years later, and I was worried about a scoring app delaying production (though I’m curious to see if any fan-made scoring apps emerge from this group).

In the end, we went with the scorepad. Each cell on the scorepad represents a different tile in the castle, which makes it easy for you to check your work. I think it was Matthew who noticed that we had some extra space in the bottom right and suggested that we add a splash of color to it–I like that addition.

Will your scorepad run out? It’s unlikely, but possible. We printed each of the 100 pages double sided, so even if you only play 7-player games, you’ll get 28 games out of the scorepad. If you play mostly 4-player games, you’ll get 50 games. Of course, if people start to run out and request to buy a new scorepad, we’ll add them to the ala carte section of our webstore.

Last, this is unrelated, but I wanted to share that one of the artists, Anez, is starting to post some of the full-size images on her ArtStation page. Here’s the Kittenry, which features cats from the designers and both co-founders of Stonemaier Games (my Biddy and Walter are the orange tabbies). 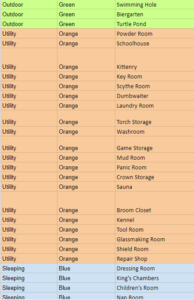 There are 147 unique room tiles (basic rooms) in Between Two Castles of Mad King Ludwig. How did we choose their names?

Well, we started with information we already had: Castles of Mad King Ludwig. There are 75 basic room tiles in that game, so we listed them on a Google Doc.

But for a 7-player drafting game, we needed a lot more room tiles than 75. Ben and Matthew calculated that we needed a little more than 20 tiles of 7 different types.

So the Google Doc got a lot bigger, nearly twice the size. This was a fun part of the design process. Ben, Matthew, Alan, and I contributed various names and ideas to the document over the course of a month, adding and changing room names based on (a) differentiating the rooms (nothing too similar), (b) realism (rooms that you’d find in a 19th-century castle), and (c) fun (memorable room names, but nothing too outlandish).

I’ve posted a screenshot here so you can see what the Google Doc looks like.

Here are a few of my favorite room names: Cape Room, Chocolate Room, Aviary, Kittenry, Scythe Room, In-Law Suite, Between Two Rooms, Wine Cellar. Yes, many of those are nods to our other games. :)

What are some of your favorite room names in Between Two Castles of Mad King Ludwig?

How did this weird mashup of two published games happen? I’ll share the story in today’s design diary. Ben, Matthew, feel free to chime in if I remember any aspect of this incorrectly.

After the release of Between Two Cities, Ben and Matthew (the designers) asked me what I thought about them making another Between Two game. I was intrigued as long as it brought something new and fresh (while still creating the unique feel of partnership and collaboration in a competitive game). We brainstormed a few different themes, and I mentioned that I love castles.

A year or so later after trying several themes and versions of new Between Two games, Ben was at Geekway to the West, and he said he had some news to share. Apparently local playtesting for a castles-themed game had been going quite well. But, Ben said, many of the mechanisms were heavily inspired by Castles of Mad King Ludwig, so he was worried about how Bezier Games would feel about that.

We were both excited by that prospect. Ben knew Ted, so he made the initial contact and showed the game to Ted at Origins 2017. I also played it around that time to make sure it was a game I wanted to publish, and indeed that was the case—it was a little rough around the edges, but overall it captured everything I love about each of the two games.

I met with Ted at Gen Con 2017. There played Palace of Mad King Ludwig together, which both provided good inspiration for Between Two Castles and was a personal highlight for me–I was playing a Ludwig game with the designer of one of my favorite games! (For those keeping count, this was probably the first hint I publicly dropped that we would be collaborating.)

We worked out a deal with Bezier that amounted to a licensing deal (Stonemaier Games is the publisher with full responsibilities for developing, blind playtesting, art, graphic design, production, marketing, distribution, localization, etc), with Ted playtesting the game at several key points along the way, selling it at Essen, and essentially putting his brand’s stamp of approval on it via the Ludwig name. It’s been a fruitful collaboration, and I’m so glad we were able to make it happen!