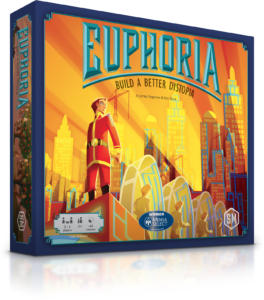 The current printing of Euphoria is pretty much identical to the second and third printings. However, we did add one component: Game Trayz are now included inside the box. You can tell the difference at local retailers because there is a “Game Trayz inside” sticker on the shrinkwrap of this printing. Also, the SKU has changed from STM200 to STM205.

The second printing of Euphoria is now available! It is available in Europe in English, French, German, and Czech, as well as in the US. Very little is different between the second printing and the first–there are a few more resource and commodity tokens, and there are wooden stars instead of cardboard stars.

Also, 16 of the recruit cards have been updated–these are included in the second printing. These 16 cards are included for free in each Treasure Chest we sell, and they are available through the BGG store for $5. A comparison of those recruits to the originals can be found here.

Why Did We Update 16 Recruits?

There were a few broken cards (Michael the Engineer and Nakagawa the Tribute) that we needed to fix, along with other cards that were either slightly too good or not good enough.

One fairly consistent note is that a lot of cards had a cost of -2 morale or +2 knowledge. We considered them roughly the same in playtesting, but it was revealed when the game hit a much bigger audience that people considered knowledge much more valuable than morale. So we decreased most of the knowledge costs to +1 knowledge.

There were also a few cards that had confusing phrasing (people consistently asked for clarification), so we made the cards easier to understand.

Other than at the beginning of the game, when do I roll dice (workers)?

Whenever you remove dice from the board for any reason, roll that die or dice. Here are the situations in which you will be rolling a die or dice:

When do I check for total knowledge?

Check for total knowledge every time you roll at least one die(see above answer for those times).

If there are open spaces on a territory, can I place more than one of my authority tokens on that territory?

Yes. Here are the various places you can place authority tokens:

Can any player place a worker on a standard tunnel action space?

Any player may place a worker on any action space on the board (including the tunnels) regardless of their allegiance, with the one exception being the action spaces that open up when a tunnel is complete. The unlocked action spaces are only available for players who have a recruit of faction who controls that tunnel (see the name of the tunnel, e.g., Euphorian Tunnel).

On the sixth tier of the tunnel, which recruit cards are activated?

If I use my ethical dilemma to draw a new recruit and recruits of that faction have already been activated via the tunnel or allegiance track, is that new recruit activated right away?

Yes it is. On a similar note, if the end of the allegiance track for that faction has been reached, it is both activated and receives an authority token right away.

What does the “any resource” icon mean on the board and on recruit cards?

The “any resource” icon, a 3D cube in the colors of gold, clay, and stone, is seen on the board on some Icarite markets. It means “1 of any resource.” However, there are also some recruit cards that have abilities that activate if you have no resources in your possession–they also use the “any resource” icon to indicate this. Example: Zong the Astronomer says, “When you place a worker on the Cloud Mine, if you have no [any resource] and…” In those cases it should be read simply as “resources”.

If I’m being penalized by a market that makes me lose a resource or commodity every time a roll a 4, what happens if I roll two 4s?

Is the Worker Activation Tank part of Subterra?

Nope. The Tank is not aligned to any factions.

Placing multiple workers on the same turn: I’ve heard a lot of ideas thrown around, but as a whole, the game plays almost exactly like I want it to. The only unofficial variant someone mentioned on BGG that I like is if your group doesn’t like the rule about rolling doubles (the rule is if you start your turn with dice that share the same number from previous rolls, you may place all dice that share that number on the same turn–doubles, triples, even quadruples), you could tweak it to say: “If you roll doubles or triples (or quadruples!), if you want to place more than one of those workers on the same turn, you have to lose 1 morale for each one of them before you place it.”

Teaching a game to new players can be daunting and stressful, and so I want to make it as easy on you as possible. Please take a look at this 7-minute video on how to teach Euphoria. It includes 9 tips for teaching the game. I’ll list them below in case you just want to read them:

Focus on one faction’s area on the board when teaching/learning Euphoria to reduce the amount of initial information.

The following card and tile should change to this:

Michael loses his ability to advance the Euphorian allegiance track, and he now gains knowledge when he uses gold. The Lounge previously did not allow a player to build a constructed market on their own (if other players don’t help, it becomes impossible for that player to build, which wasn’t our intent), so now that’s possible. It’s just a clarification to the original tile, not an actual change.