A complete list of all visitor cards in Tuscany is here. The Formaggio and Arboriculture expansions are available here.

What’s the difference between the various versions of Tuscany?

All versions of Tuscany include all the same game-related components and all stretch goals. So if you buy the retail version of Tuscany (STM300), you’re getting the exact same thing that Kickstarter backers received at the $45 or $79 reward levels. Here are each of the different SKUs:

Is there a misprint on the property tiles?

There is a mistake on the property tiles (not a misprint–it’s my fault, not the printer’s). Each of the lira amounts on the property numbers should be the same on the front and the back. For example, you can sell the 5-lira property tile to gain 5 lira, and then you can buy it back later if you want for 5 lira. However, the punchboard got flipped, and the back of the 5-lira property says that it would cost you 7 lira to buy it back. The situation is reversed for the 7-lira property tile. You can buy the stickers for $1 on BGG or request the stickers on our replacement parts form, or just remember that the numbers should match up. It’s very rare that a player would buy back a property after selling it, but it does happen occasionally.

Is there a misprint on the Harvest Machine card in the Structure Expansion?

Yes and no. It probably should be 2 lira, but itt is fine to play with this card at cost 0, as you still have to use a worker to build it in the first place. In future reprints we will put the 2-lira cost back on the card, but both versions are legal. The correct Harvest Machine card is include in Moor Visitors.

Is the victory point on the new sell grapes/flip property tile available for 2-players?

No, that’s an error in the rules (originally we did make the VP available for a 2-player game, but we changed it in playtesting). 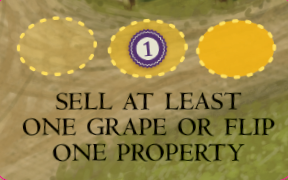 Are there some missing words on the left side of page 5 in the Tuscany rules?

Yes, the following sentence is incomplete: “Visitor cards that refer to your fields only refer to the fields you currently own.”

See below for the second-edition vineyard mats to see where to place those stickers. 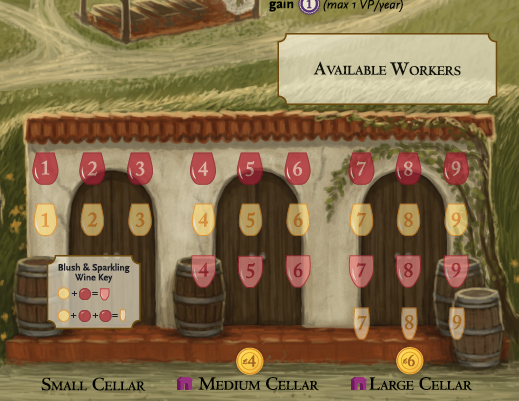 Where are the promo cards from the original game?

The 4 promo cards are now in every copy of Tuscany in the Arboriculture expansion. They’re not tied to Arboriculture in any way–you can put them in the game from Game 1.

Before the game begins, players may decide to not score any points for stars at the end of the game (stars still give you cards/lira during the game). We recommend using this variant for 2-player games.

If you’re not playing with the extended board, you can draft structure cards at the beginning of the game. After selecting Mamas & Papas, draw 4 structure cards, selects 1, and passes the others to the player on your right. Proceed until each player has selected 4 cards. These cards count towards your hand size.