The Wingspan rulebooks are available for download. There is also a full rules video by Watch It Played.

The European Expansion rulebook is here.

If you have rule questions, please post them in the comments on this page, create a thread on BoardGameGeek, or ask them in the Wingspan Facebook group. The official Stonemaier Games response and solution to first-printing typos is posted here.

Can you discard birds from your player mat?

No, once you play a bird, it’s permanent.

When I gain food from the birdfeeder, do I choose all of the dice at once, or one by one?

Choose dice one at a time. This creates the potential for you to reroll in between dice selections.

My bird card says ‘WHEN ACTIVATED: Gain 1 [food type] from the birdfeeder, if there is one.‘ There’s another bird card that says I can gain a specific food “if available.” Can I reroll if there’s only one type of die face in the feeder?

Yes, regular reroll rules apply whenever you have the opportunity to gain food (see “Managing the birdfeeder”).

When activating “migrating” birds that can move from one habitat to another, does the action token move with them? Can they move even if they’re the only bird in the original habitat?

The action token stays with the original row, as that’s the action you chose for this turn. And yes, even if the bird is the only bird in the original row, they can fly over to another habitat (the point is just that they can’t move if there’s a bird card to their right).

When a bird says that I can “repeat” another bird’s ability in the same habitat, how does that work?

Basically, it means that you can re-activate any other “when activated” bird in that habitat. It doesn’t matter if you’ve already activated that bird or not this turn.

Automa: Who goes first each round, you or the Automa?

For each of the 4 rounds, you always go first and the Automa always takes the last turn.

Is the percentage on the Omnivore Expert bonus card correct?

Does “prairie” count as a term for the Cartographer bonus card?

What does the Photographer score for 4-5 birds with colors in their names? 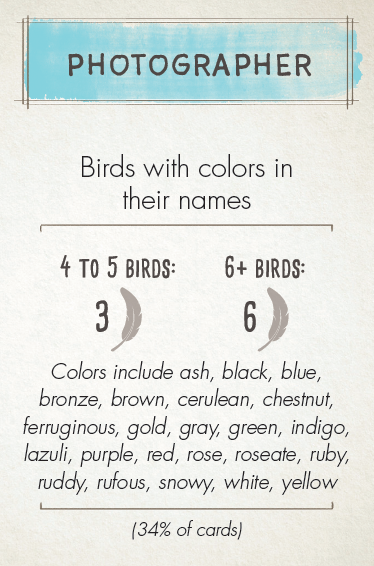 Should the Spotted Sandpiper be worth 5 points, not 4? 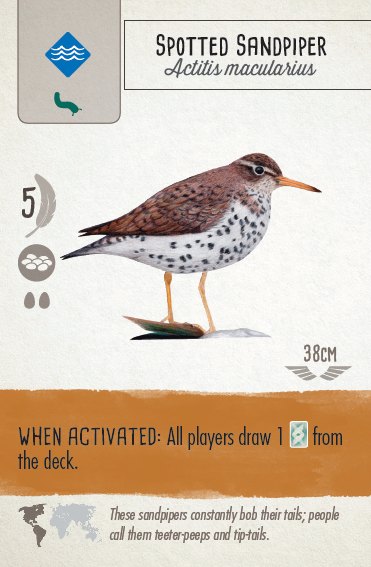 Is there a list of all bonus cards in the base game?

What are the card sizes and quantities?

How do I know which printing I have?

Look at the number to the left of the panda icon near the bar code on the bottom of your box (English printings only). The update pack is only “needed” for the first and second printings. 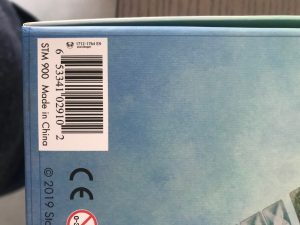 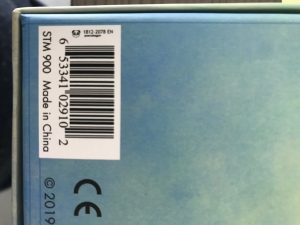 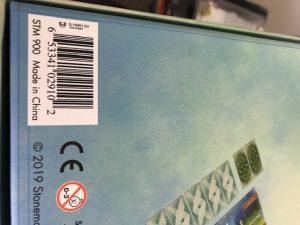 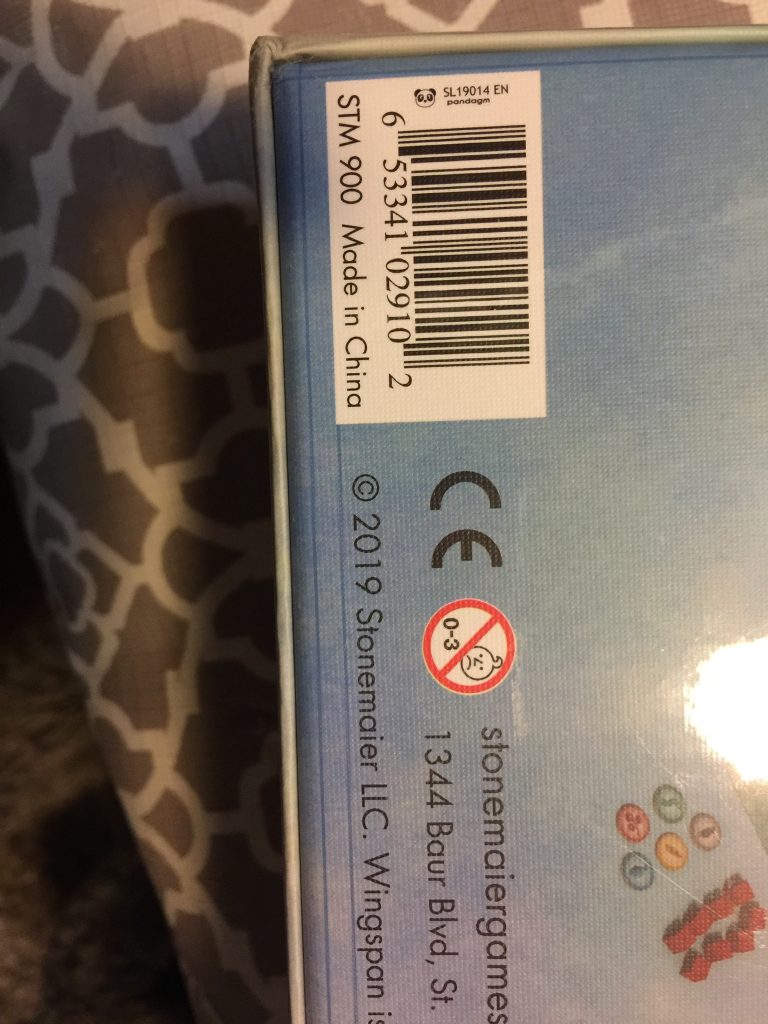 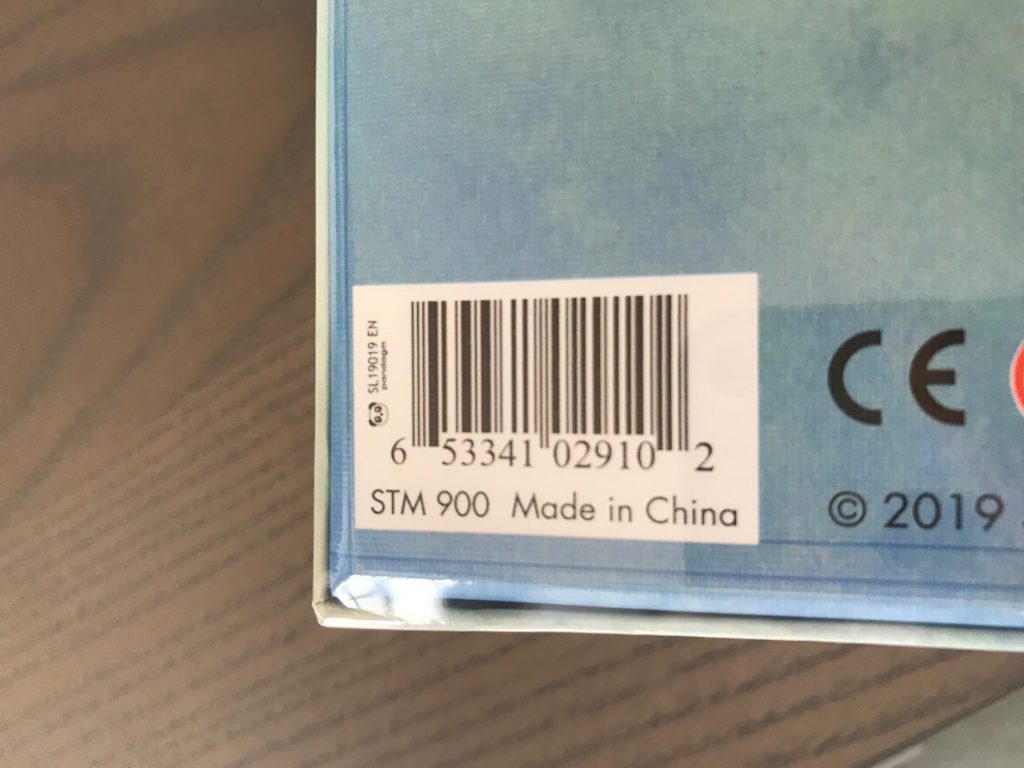 You know you have the 7th printing or later (which include the swift-start pack in the box) if you see this at the upper right of the box bottom:

What are the plastic containers for?

Two of the containers are for the food tokens; the other two are for eggs (see the diagram on the side of the box bottom). When playing Wingspan, you can use both the tops and bottoms of each container, creating 8 separate piles of tokens so players can reach them easily. 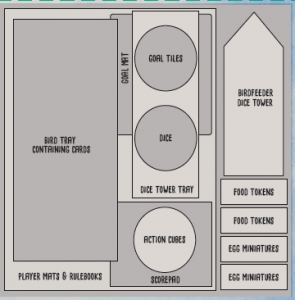 Why are so many of the birds in Wingspan from North America?

These are the birds the designer knows best, so she focused on them for the core game. However, the plan is for each expansion to focus on birds of a different continent.

Does the insert fit sleeved cards? Does it have room for expansions?

Yes, the insert fits sleeved cards (that’s a standard feature for all Game Trayz inserts). The one exception may be if you buy really thick, premium sleeves, as the height of all sleeved cards may be too tall. The tray will be full of sleeved bird cards, so expansion cards will need to be kept in plastic bags (they’ll still fit in the box).

Is it language independent?

No, quite the opposite: Wingspan is heavily language dependent.

Does Wingspan only include birds from North America?

Most of the birds found in the core game are predominantly found in North America. However, each expansion will feature a different region: We’re hoping to explore Europe, Africa, Asia, South America, and Australia/NZ.

Why isn’t there any player interaction in Wingspan?

Wingspan actually has quite a bit of interaction: The dice you choose from the dice tower (and when you choose to reroll them), the bird cards you choose (if you take a face up card, you’re taking it away from your opponents), the end-of-round goals (when playing on the green side of the goal mat), and quite a few bird cards that result in other players gaining food, drawing cards, etc.

What I think you’re asking for–and what most people seem to mean when they ask for “more player interaction”–is more *direct conflict*. That simply isn’t what Wingspan is about; it is, after all, a game about managing a bird sanctuary. :)

Will the game be released in other languages?

Yes! Our partners will announce their versions when they’re ready. Currently the game has been announced by Feuerland (German), Matagot (French), Maldito (Spanish), 999 Games (Dutch), and Delta Vision (Hungarian).

Are there any unofficial Wingspan accessories or digital products?