Lessons Learned from Quitting Kickstarter as a Creator, Part 2

Before I bookend this tale of transition that began on Monday, I want to be clear about two things: 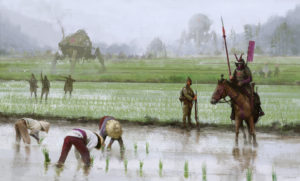 Let’s start with the story of the Scythe expansion, our first new product for which we didn’t run a crowdfunding or pre-order campaign.

When I decided about 5 months ago that I was going directly to distributors for Invaders from Afar, I quickly realized that it meant two things:

I also wanted to have as close to a simultaneous worldwide release as possible, so I reached out to a few distributors in Europe, Asia, and Australia/NZ to see if they would be interested in buying directly from the source–our manufacturer in China. There was plenty of interest, and the remaining copies (a substantial number) were sent to the US in three shipments.

What should have happened was supply would have met demand, with all expansions released by retailers in each region at the same time in late November. Here’s what actually happened in chronological order:

Look at all those layers. With Kickstarter fulfillment, there are many layers–factory to port to ocean freight to customs to freight trucking to fulfillment center to courier to consumer–but there are at least twice as many layers involved in distribution. If one link in that chain is weak, delayed, or unpredictable, it throws everything off.

If you need to go back and read Part 1 now to remind yourself why I’d do this to Stonemaier, feel free.

In case it isn’t already clear, the distribution system is when a publisher (like Stonemaier) sells products to a distributor, who handles the logistics and orders to get those products to retailers (online or brick-and-mortar). The retailers sell those products to individual consumers. Also, in our case, we employ the use of a broker to warehouse our games, manage inventory and sell our products to distributors.

For publishers, distributors are super helpful because it means we only need to handle the transactions of a dozen customers (the distributors) a few times a month instead of hundreds of customers every day. The difference in the scope of sales and time is immense, especially considering the worldwide reach of distributors despite the need of a single origin point for us (instead of me managing inventory in 5 different warehouses worldwide).

For retailers, distributors offer the convenience of consolidation. Think of it this way: Say you want to make a pizza from scratch for dinner tonight. You can go to the grocery store and buy tomatos, basil, flour, eggs, pepperoni, cheese, etc all in one place. Super easy. Now, imagine how inconvenient it would be if you had to go to a tomato store, a basil store, a flour store, etc–a different vendor for each item. The amount of time you save is worth the additional cost of consolidation.

Okay, here’s where we get to the nitty-gritty: What are the top 10 problems created by shifting from a pre-order model to the distribution system, and how are we addressing them?

This is going to be a learning process for us. It always has been. But I look forward to the journey–a very well-informed journey, thanks to people like you who offer me their thoughts, ideas, and opinions in constructive ways–just as I look forward to sharing that journey with you on this blog, as I do in Part 3 and Part 4.

41 Comments on “Lessons Learned from Quitting Kickstarter as a Creator, Part 2”