The Tapestry rulebooks and the civilization adjustment guide are available for download. There is also a full rules video by Watch It Played.

If you have rule questions, please post them in the comments on this page, create a thread on BoardGameGeek, or ask them in the Tapestry Facebook group.

A compilation of rule questions about specific cards and civilizations is created and maintained by Jay Nabedian.

Are there any common rules mistakes players are making?

Can you play trap cards after your final income turn?

Good try, but nope! Your game is over after your final income turn.

What does this tile mean?

Congrats! You’ve found the one functional (and embarrassing) misprint in the game. That should be the conquer icon, but it’s missing the black outpost token icon on the red hex. So, that tile is saying that you can perform a conquer action, then score 1 VP for each territory you control. 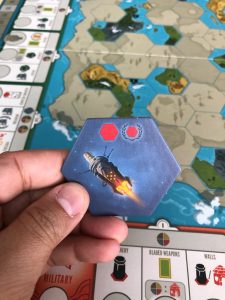 The tile should look like this (clipped from the punchboard file). 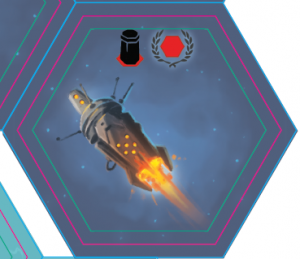 If a space on the advancement track shows more than one benefit, which order can they be taken?

Unless otherwise specified in the reference guide, the benefits can be taken in either order. If a landmark is gained by advancing, place the landmark first (if it matters–usually it does not, and you might as well wait until you’re done with your turn to place it so the game doesn’t pause for too long).

Do the Marriage of State and Espionage tapestry cards create an infinite loop?

What happens if you use a special benefit/ability to play the Technocracy card on top of a “this era” card?

When you play it, if nobody else is in the era, you get the big benefit. Otherwise, get the small benefit.

Shadow Empire Variant for 2 players: What card should we use if a tiebreaker is needed to determine the Shadow Empire’s next favorite track?

In the procedure in the “A Shadow Empire Turn” section, flip the order of steps 1a and 1b (change favorite track, then reshuffle). This means that you’ll use the tiebreaker card from the previous turn.

My level 1 Automa card is the same on both sides. Is something wrong?

Nope! It’s correct. Level 2 is printed on the mat.

If I don’t have room on my capital city mat, can I still gain a landmark or income building?

Yes! You would gain the building and place it next to your capital city mat.

Have stats for Tapestry been posted yet?

Why should I preorder from Stonemaier Games instead of waiting a few months for the retail release?

While we will offer a preorder discount, delivery much earlier than the retail release date, a guarantee that you’ll actually get an individually numbered first-run game in a timely manner, and the option to add on extra dice, I absolutely support anyone who wants to order the game from their retailer of choice. Every copy of Tapestry is identical (except for the individual numbering, which is limited to the English first printing).