When I was in Seattle a few months ago at Mox Boarding House (a game cafe), the folks behind the Fantastic Factories Kickstarter stopped by to say hi. We were chatting about the campaign, and they said something that stood out: They were surprised by the number of backers who wanted to make group pledges.

A “group pledge” on Kickstarter is when a few people (usually living close to each other) pool their funds and have a single backer place a pledge for multiple copies of the game to be shipped to the same destination. The most common motivation for this is to save on shipping costs. 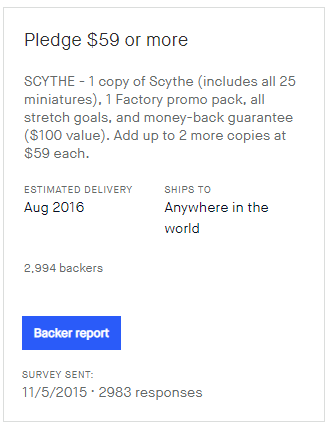 I’ll cut to the chase and make a recommendation, as I used various types of group pledges on Kickstarter, and I finally found one on Scythe that worked really well.

Basically, in the text each pledge level on Scythe, I included the following text: “Add up to 2 more copies at $X each.” X was the amount of the pledge for 1 copy of that specific reward.

So, I allowed group pledges as part of the core reward system, but for a limited number of copies per pledge, and at no discount. The reasons for this are as follows:

You will most certainly have backers asking you to offer special bundled pricing, but it still costs you the same amount to make each game–why would you devalue your product just because someone is buying 2 copies instead of 1? If a backer asks you to do this, a possible response is to say, “We can’t do that, but you still save on shipping costs, as they remain the same whether you pledge for 1 or more copies.”

I didn’t use a pledge manager on Scythe, so I asked backers on the survey how many copies of the game they had pledged to receive. It was easy to sort my spreadsheet to see when people answered inaccurately. If you’re using a pledge manager, hopefully the software lets you limit the number of copies per backer in case you try to implement a group pledge limit.

That’s my recommended method, but it’s certainly not the only option. What other options have you seen or used? What do you think about my method?