Tournament of the Apocalypse: Day 3 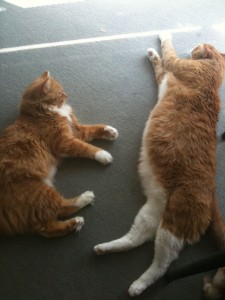 16 somewhat outlandish apocalyptic scenarios rise. All but 1 will fall. That final scenario will inspire the creation of several new recruit cards that will go in every copy of Euphoria. The recruits themselves won’t be outlandish–they will fit the tone of the game.

Those are my cats in the photo. They claim that they’re not plotting to take over my condo and then the world, but I know better than to believe them.

8 Comments on “Tournament of the Apocalypse: Day 3”