Many of the most successful Kickstarter projects start with a strong launch day. Starting strong isn’t a matter of luck or timing; rather, the projects that attract backers on Day 1 are those that have gathered a substantial crowd of potential backers well before that day.

Kickstarter has even made it easy for creators to share a snippet of their project where people can click “notify me,” with the total tally shown on the preview page (like on Frosthaven, below). This can also be done through Backerkit Launch or more manually through MailChimp, like what we did to contribute to the wildfire relief efforts in Australia.

Recently, however, some innovative creators have taken pre-launch signups to a new level. Some, Wonderland’s War and Return to Dark Tower offered early project followers a special component for free if they later back the project. Others, like Monumental (via Ian Blackburn) and Iwari use a plugin called Gleam to generate social media activity and ultimately give away a free copy of the product to a random winner.

My favorite version of this so far is what Thundergryph did for Tang Garden, as they both rewarded early followers (if they later backed the game) and contributed to environmental conservation efforts. 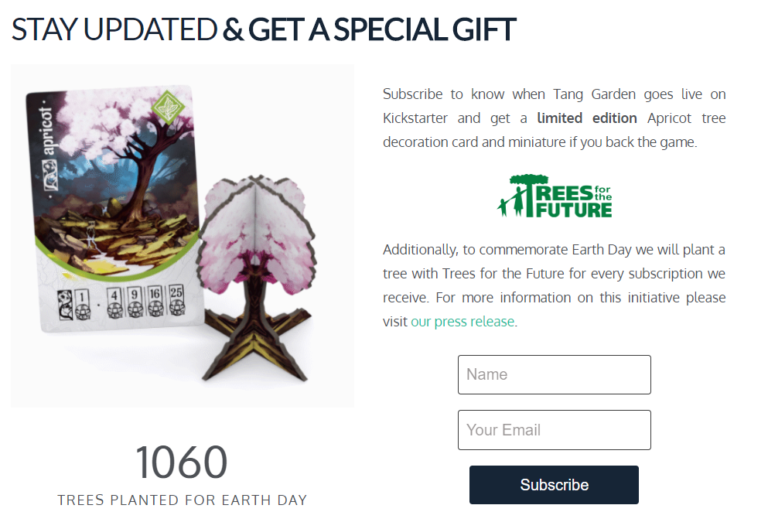 But the innovation doesn’t stop there! As keenly observed by Cody from Gold Nugget Games, a few creators have started creating pre-launch stretch goals. For example, for Tumble Town, Carla from Weird Giraffe Games set a pre-launch goal of 500 followers. If they reached that goal–which was easily visible on their pre-launch Kickstarter page–every backer of the game would receive a free expansion. Cody mentioned that Chad from 25th Century Games did something similar for Jurassic Parts.

I really like this for the same reason I like stretch goals in general: By joining in, each person helps themselves and all other backers. That is, the special rewards aren’t limited to those who sign up. This increases the chances that people might share the project pre-launch (unlike giveaways, which discourage sharing).

Also, by reaching a stretch goal before launch, you trigger the psychological benefits of endowed progress–backers feel like they’re already ahead on Day 1.

I think there’s a limit, though. One pre-launch stretch goal is fine, but I’d worry about adding more, as a potential backer offers a very different value than an actual backer. Even though they’re mostly a marketing tool, I think stretch goals are the most effective when they’re tied–even loosely–to economies of scale.

Of course, I’d love to hear what you think! What pre-launch strategy for attracting potential backers is most appealing to you? What do you think about the idea of a pre-launch stretch goal?