Each player in Scythe can deploy up 4 mechs to assert force over the uncharted lands surrounding the Factory and to protect their workers and territories. Each mech is linked to a special ability, most of which are unique to each faction. When a player deploys a mech, that player’s mechs and character all gain the ability.

Republic of Polania (white): The Polanian mech is inspired by the streamlined look of airplanes and submarines. It has the ability to submerge into a lake and–by using the underground river system–surface on any other lake. It’s also people-friendly, as the Polanian player can use the mech to gently push opponent’s workers off of territories without losing popularity.

Saxony Empire (black): The Saxon mech is built for tunneling through narrow passages in the mountains of Saxony and beyond. You don’t want to face a Saxon mech in combat in the dark depths of a tunnel.

Crimean Khanate (yellow): The Crimean mech is pieced together from the scrapyard, as the Crimeans rejected the idea mech technology until it was too late. It specializes in traveling long distances and can allow a player to scout and steal an opponent’s combat card before combat begins.

Nordic Kingdoms (blue): The Nordic mech is inspired by Viking longships. It has the ability to both walk on land and sail on lakes, and it comes with long-range artillery to damage the opponent before combat even begins.

Rusviet Union (red): The Rusviet mech, with its war scythes, is a formidable figure on the battlefield. It has access to a secret network leading from villages to the Factory. It also becomes more powerful in combat when accompanied by workers.

Clan Albion (green): The Albion mech, inspired by Scottish bagpipes, has a rotating array of weapons that can be used for attack or defense. It also has the ability to use tunnel territories as a guide to cross rivers, and they can quickly cross great expanses to rally to help endangered workers.

Togawa Shogunate (purple): The Togawa mechs are built to sustain even the harshest elements, particularly water. They’re built for solo combat and adventures, not pack hunting. And they include several devious contraptions that allow them to rearm traps laid by Akiko and Jiro. 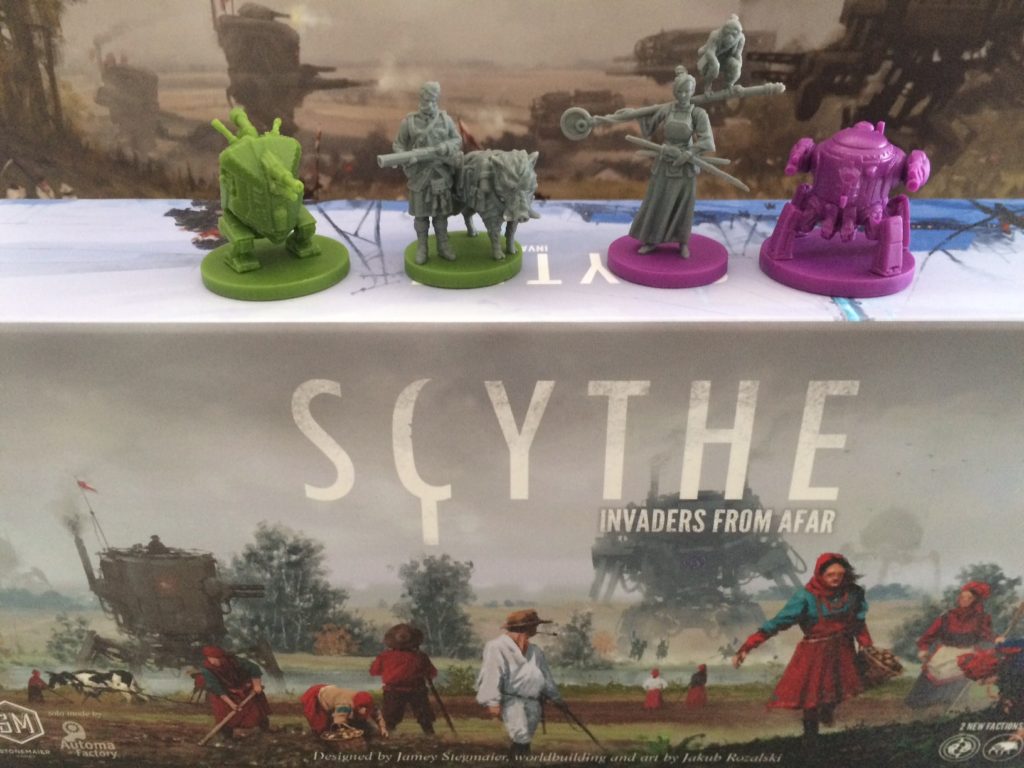 These mechs and illustrations were created by Jakub Rozalski. Carsten Biernat & Jozsef Szollosi of Unique Voodoo Studio are the 3D modelers for Scythe’s miniatures.