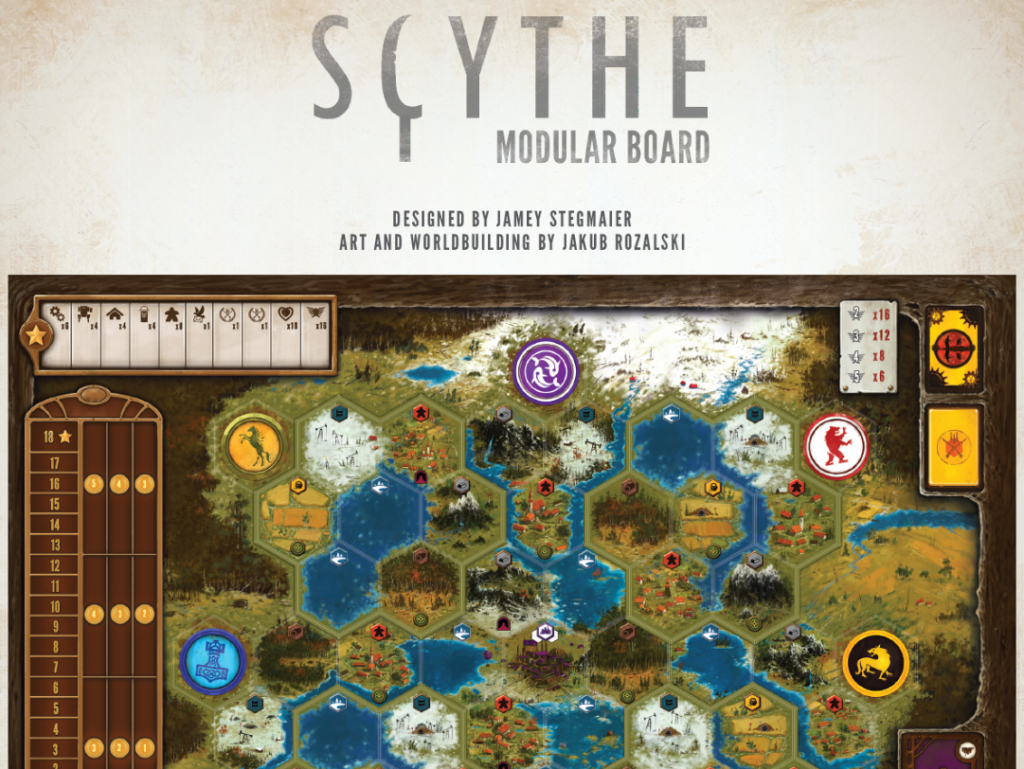 The modular board changes the landscape of Eastern Europa every time you play Scythe.

Between the double-sided board, double sided tiles, and home base tiles, the modular board creates millions of possible board layouts. 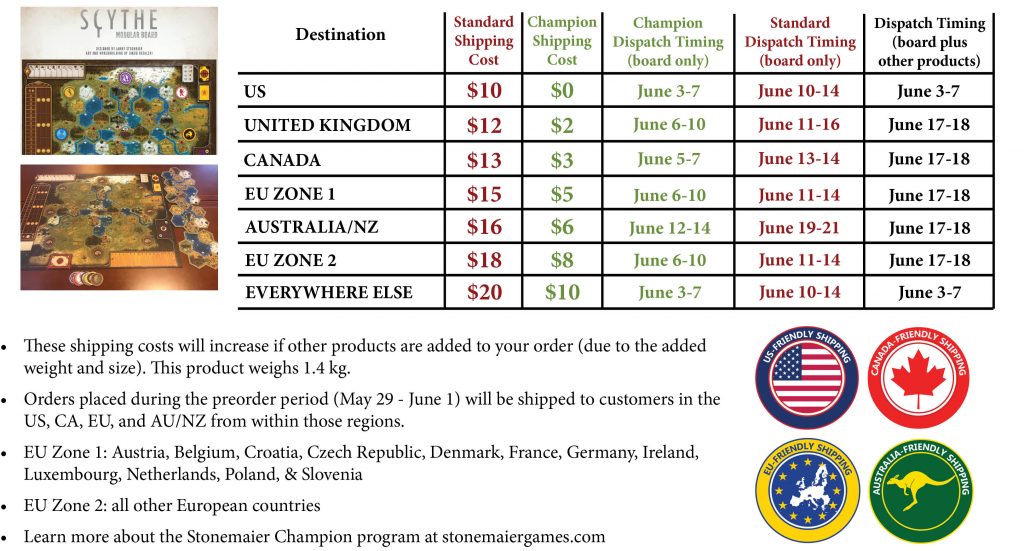 Is the modular board compatible with other Scythe expansions?

Yes, technically all of them. However, thematically we would not recommend using it with The Rise of Fenris–it creates some weird interactions with the ongoing campaign and some of the episodic elements.

Will the modular board fit into the Legendary Box?

Yes, the board is the same length and width as the original board, so it fits perfect. The tiles just add height.

Won’t the random setup result in some factions being more or less constrained by rivers?

Yes. We’ve implemented measures to ensure that each faction has at least a few easily accessible territories, but they may be more or less conducive to riverwalk abilities than in the standard game. Players may need to build mines more often than usual. Our overarching method for addressing this is that players will draft their starting position after the board is set up.

Will there be a version of the modular board with bigger hexes (like the board extension)?

We explored this idea, but in terms of length and width, the tiles–which are groups of 7 hexes) would not fit into the Scythe box if they were the size of the hexes on the board extension. There’s also the issue of cost (it would be significantly more expensive). This is the only version of the modular board we will ever make.

When using the modular board do you randomly choose the structure bonus before or after the players chose their factions?

Randomly select and reveal the structure bonus tile after placing the board on the table (after step 1 of the modular board setup).

What languages does the rulebook include?

One of my greatest surprises and pleasures that has emerged from Scythe and Stonemaier Games is seeing fans create modules and expansions. You have created things that are far beyond my imagination.

When I was designing the modular board, by sheer coincidence a few different fans posted ideas for new structure bonus tiles. I liked some of the ideas and proceeded to tweak and playtest them.

At first I thought I’d offer them as a separate promo, but I know it can be a bit arduous to try to track down every Scythe promo. Simply including them in the modular board pack seemed like a better way to serve you.

So that’s what we did! In addition to the game board and the 4 punchboards, there’s a 5th punchboard featuring 8 new structure bonus tiles. The structure tiles are to be shuffled in with the original tiles even when you’re not using the modular board.

Big thanks to Patrice Piron, Jeremy Ellis, and Mihir Shah for inspiring these designs! Which tiles are you the most curious to try?

May 7: Issues Discovered and Solved During the Design Process

Yesterday I discussed how the Scythe modular board went from being inconceivable to a possibility. However, I still discovered a number of potential issues during the design process, and today I’d like to share those problems and our solutions.

Also, before I begin, I should note that we’ve already made the modular board. Production is complete, and it’s on the boat to the US (and other fulfillment centers).

Did I miss anything? If so, I’m happy to clarify and respond.

May 6: Why the Board Wasn’t Possible (Until It Was Possible)

This week I’ll be discussing the design process of the modular board and exactly how it works, culminating in a Watch It Played video on Thursday and a full rulebook reveal on Friday.

1. The rivers are biggest challenge in creating a modular board. If the board were a random set of hexagonal tiles, you would have rivers that only run along a single edge between tiles, which doesn’t really serve a mechanical purpose (nor does it work aesthetically or thematically).

This was by far the biggest hurdle in even conceiving the possibility of a modular board. If Scythe didn’t have rivers, it would be much easier. But rivers are quite important in Scythe, both to give each player the security of their own little patch of land and to give players a barrier to overcome as they venture out into the world. With individual hex tiles, a cohesive river structure isn’t possible, and encounters and tunnels could end up extremely unbalanced.

But then I played Clans of Caledonia, and I realized that I was being shortsighted in limiting myself to individual hex tiles. Caledonia uses 4 double-sided tiles consisting of big groups of hexes, rivers running through each group. That’s when the idea of 7-hex tiles clicked for me, and that’s what I ended up testing, balancing, and using.

The loss here is that the tiles removed the possibility of having a “fog of exploration” where you only discover certain parts of the board when your unit arrives there. However, with the way riverwalk and other terrain-specific movement works in Scythe, this never really would have worked anyway.

2. The art simply wouldn’t be nearly as cohesive if it were made of modular tiles. The Scythe board tells a story; modular hexes do not. The world of Scythe isn’t modular–this is a specific world we’ve built that’s based on an alternate-history 1920s Eastern Europe, not a random one generated by the players.

This is still partly true, though we figured out the art portion thanks to the efforts of Jakub and Christine (our graphic designer). As for the world of Scythe, the official Scythe storyline ended with The Rise of Fenris, so after consulting with Jakub, we decided it was fine to make a few products that are mechanically consistent with the game but venture beyond the core storyline (the other product being Scythe Encounters).

3. The map is one of the biggest aspects of the faction-based asymmetry in the game. We’ve designed the Nordic faction’s abilities based on them starting in the north with limited access to certain resources, for example, and all factions have a mech “riverwalk” ability that correlates precisely to their homeland. Same with all the other factions.

I agree that a core part of the asymmetry of Scythe is related to your faction’s starting position (both their seating position and the territories to which they have immediate access). For that reason, the original board will always remain important and relevant.

My biggest concern was probably each faction’s ability to riverwalk out of their starting area and not be able to riverwalk directly into another faction’s area. With a randomized board, that balance becomes much more difficult to control.

However, I figured it out due to a combination of careful tile design, careful board design, knowledge that a landlocked player could still build a Mine, and the addition of a draft at the beginning of the game after the faction tiles have been randomly placed on 1 of the 8 home bases on the board. The result is one of my favorite aspects of the game–you’ll be seeing a new board from a new perspective every time you play.

4. The board includes three tracks and several places to put cards, which allows for better organization than if these items were floating around the table.

I previously mentioned how Clans of Caledonia helped me think of the grouped hex tiles. However, I was still stumped for a while about how Scythe would work without a board–at the very least, I would need to provide other tiles for the triumph, power, and popularity tracks. Also, I was concerned about the potentially odd (and even game-breaking) layouts that could occur with interlocking tiles.

Then I realized that just because I was using modular tiles didn’t mean I couldn’t also use a board to solve those issues. Not only that, but a board could add even more variability (it’s double sided) and it makes setup and cleanup much easier than dealing with 40 individual hex tiles.

5. There’s already a lot of variability in the Scythe setup (namely, 25 different combinations of faction and player mats and tons of different objective and encounter cards).

I’m still happy with the sheer about of variability and replayability in Scythe, even just the core game. But I’ve been overjoyed to learn over the last few years that there are quite a few people who have played Scythe dozens of times. This board is for you. And even if you’ve only played a few times, you might still give this a try. :)

Those are all of the reasons I thought the modular board would never be possible. It took me a while to figure it out, and I appreciate your patience. I look forward to hearing stories of your adventures on the new board in June (or later this summer if you wait to buy from a retailer)!

If you have any questions about anything I mentioned above, please ask in the comments. :) 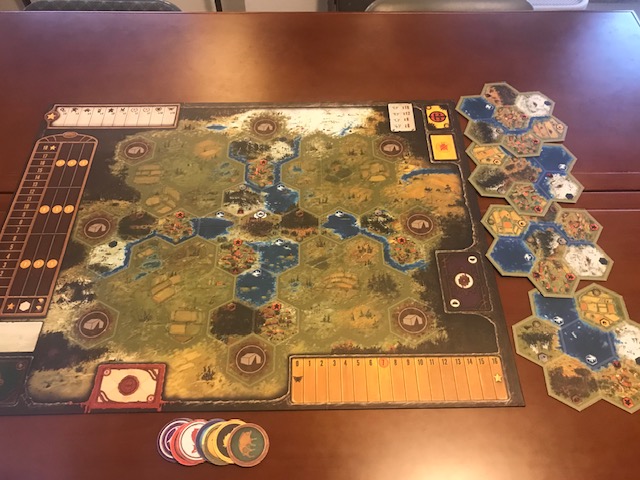 186 Comments on “Scythe Modular Board”